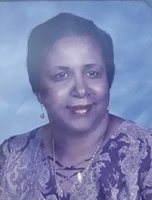 Jessy Kernisan Blot died peacefully on Friday, January 29th, 2021 after a long illness. She was born in Port-au-Prince, Haiti to Jean Kernisan and Yvonne Maurasse. Jessy was the youngest of 8 children. She migrated to America at an early age and attended Bronx Community College. She worked at Jacobi Hospital as a Registered Nurse. She excelled and became a Head Nurse and then a General Practitioner. Jessy was a devout Roman Catholic very deeply rooted in her faith which guided many of her decisions. Jessy attended Holy Rosary RC Church in which she served as a Eucharistic Minister and taught RCAI for many years. She was a devoted wife, loving mother and doting grandmother. Jessy was preceded by her 7 siblings, Maurice, Jeanine, Rolande, Jacqueline, Gislaine, Marthe and Gerard. She is survived by her husband Michel, her sons Mike and Marc, her daughter Mireille, her daughter-in-law Tammi, her granddaughters Meishya, Kayla, Jeda and Jea, her grandsons Jason, Darren, Jordan and Bryce and a host of nieces and nephews. She was beloved by friends and family including but not limited to the Blots, Kernisans, Maurasses, Saint Louis’ and the Hassells. Jessy will forever be in our hearts and will be dearly missed. With everyone’s health and NY regulations in mind, the number of visitors must be monitored. Mourners will be asked to be patient and must prepare to wait outside the building. Visitors will be cycled through while practicing social distancing so that all may have the chance to pay their respects. Please remember, the sick, elderly and those with compromised health, should avoid public settings Viewing will be held on Thursday, February 4, 2021 from 8:30 - 9:30 A.M. in Farenga Bros. Funeral Home, 920 Allerton Avenue, Bronx, NY 10469 A Mass of Christian Burial will be held… Our Parishes are also practicing recommended guidelines, limiting the number of people that may gather in church. Seating for family will be designated, and friends will be allowed in as room permits, however, this will be limited. If you would like to attend the Funeral Mass, please understand that seating cannot be guaranteed and you should be prepared to observe from a distance. Mass of Christian Burial will be held on Thursday, February 4, 2021 at 10:00 A.M. in Holy Rosary, Bronx, NY Interment will follow in Woodlawn Cemetery, Bronx, NY