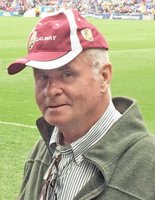 Jeremiah O’Sullivan, age 76 years-old. Life-long resident of the Bronx, New York. Predeceased by his wife Mary O’Sullivan (nee O’Brien, Co. Galway) 8 years ago. Devoted father to Jerry (Bernadette), Deirdre (Erik), John (Susan), and Noreen (Justin). Beloved grandfather to Hailey, Erik, Jack, Egan, Ailish, Meghan, Nolin, Eamon, Sean, and Thomas. Loving fiancé to Ita Roche, whose family he came to know and love. Jerry is also survived by his adoring siblings Johanna (Billy), Mary (Kenny), John (Dianne), and Noreen (John). He was a cherished uncle to many nieces and nephews here in New York, as well as in Ireland and England. He had a true friendship with Mary’s brothers, sisters, and their families as well. A bus driver for the majority of his adult life, Jerry was a kind-hearted soul who touched so many lives in such a positive way. He was a friend to all and a true gentleman who will be missed beyond measure. Viewing will be held on Tuesday, May 4, 2021 from 2:00 - 5:00 and 7:00 - 9:00 P.M. in Hodder Farenga Funeral Home, 899 McLean Avenue, Yonkers, NY 10704 Mass of Christian Burial will be held on Wednesday, May 5, 2021 at 10:45 A.M. in St. Barnabas Church, Bronx, NY Interment will follow in Gethsemane Cemetery, 82 Lake Road, Congers, NY 10920