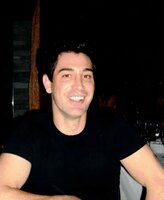 Paul was born on May 24, 1973 in The Bronx NY. He is the youngest of six children and mom’s favorite - affectionately called “Peach Blossom”.  At the age of 25, Paul set out on one of his many adventures and moved to San Francisco; where he built a plumbing business with nothing but his skills and ingenuity. But being a Master Plumber and building west coast O’Grady Plumbing was only one of Paul’s many accomplishments.

Paul was a pilot who loved flying high with friends and family over the city he called home…. He was a published author and magazine model…Screen writer and a producer…. Many of us brag about Paul being a diehard Yankee fan…. Or his short stint as a pugilist in the Golden Gloves… He never ceased to amaze us… An endless list of accomplishments….

Paul had a passionate love affair with his snowboard; and brought it around the country. Whether Lake Tahoe or Vermont, he would meet with his Bronx childhood friends several time a year and go off on a snow boarding adventure.

He was both a driven entrepreneur and an easygoing guy who encouraged his employees to bring their dogs to work and gave his staff days off to go snowboarding or some other adventure when they wanted. He was miles head of everyone and yet somehow could keep his family and friends close to his heart.   Like his heart, Paul’s stories (antics) knew no bounds. He helped people who crossed his path. He always had a bed and a job for the less fortunate. He accomplished his dream of becoming a hotelier when he purchased a “Castle” and turned it from a den of iniquity to a sought after bed and breakfast.  Words simply cannot do him or his achievements justice.

Paul left us suddenly. No buildings named after him; no monuments erected in his honor. But he had the chance to know and love each and every friend as well as all his family.  His father, Martin O’Grady, needed a plumber in heaven and sent for Paul. How much more blessed can a person be? Paul will be FOREVER missed by his family and friends and doggies he loved so dearly. So in the end, remember… do your best, follow your heart, and make something amazing out of your life.  Oh, and never stop smiling.