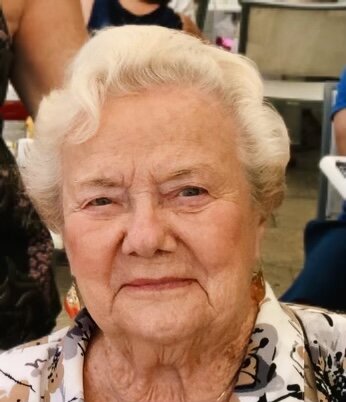 Margaret Mary Theresa Beaney was born on March 5, 1930, a few minutes after her beloved twin sister Magdalen. Margaret and Magdalen grew up in the Bronx with their older brother Joseph. They went to grade school in Our Lady of Angels Parish and then graduated from Walton High School. Marge (and Magdalen) went to work at the International Paper Company in Manhattan.
Margaret and Magdalen were not only sisters, but best friends. They had uncannily similar interests, tastes, likes and dislikes: One Christmas, they unknowingly bought each other the exact same gift. The sisters were identical in appearance and were often confused for each other, much to their amusement. This amusement extended on one occasion to secretly switching their boyfriends while on a date - suffice it to say, it did not go well.
Marge always loved music, and was a talented singer. She joined the Welsh Chorale, a local singing group. There, she met the love of her life - Joseph Byrne. Marge and Joe were married in 1954. Earlier this year, they celebrated their 68th anniversary together. The couple was eventually blessed with four daughters (Theresa, Nancy, Peggy, and Lorraine), eight grandchildren (Jess, Michael, Denise, Chris, Claire, Joseph, Luke, and Martin), and great grandson Connor. Marge and Joe were devoted to each other and to their family, and their children and grandchildren adored them. After she married, Marge stayed home to be with her children. Their home on East 234th Street in Woodlawn was a center of comfort and happiness for their family and for numerous others - many kids in the neighborhood thought of Marge as a second mother.
Marge’s deep faith was central to her life. She attended Mass regularly and prayed frequently and fervently. For Marge, faith was just a natural part of life. She was often involved in volunteer work, including traveling to West Virginia with Joe and other family members to work with the Passionist Volunteers. She and Magdalen spent many hours working and praying with the Good Shepherd Sisters.
After the kids got a bit older, Marge started working part time at Gimbels, but insisted that she be able to be home by three o’clock each day for when her younger children would get out of school. The store at first refused, but eventually gave in - Marge could be stubborn when she believed something was the right thing to do!
After she stopped working, Marge took up painting, and became quite good at it. Numerous landscapes and still lifes adorn the walls of her children’s homes. Marge and Joe loved tennis, and regularly played doubles at the Amackassin Club and elsewhere. They also were avid card players, particularly bridge. And Marge and Joe loved to dance, especially the Lindy! In 2020, despite suffering with the aches and pains of old age, they got up and danced together for the last time at their grandson’s wedding - there was not a dry eye in the hall.
Margaret Byrne’s was a long life well lived.
Marge’s family requests that, in lieu of flowers, a donation be made in her name to PV Volunteers, the successor to the Passionist Volunteers that she and Joe volunteered with for so many summers, rebuilding communities in Appalachia. Their address is PV Volunteers, P.O. Box 295, Pineville, West Virginia 24874, or you can use the following link: https://pvprogram.org/wp/support-us/