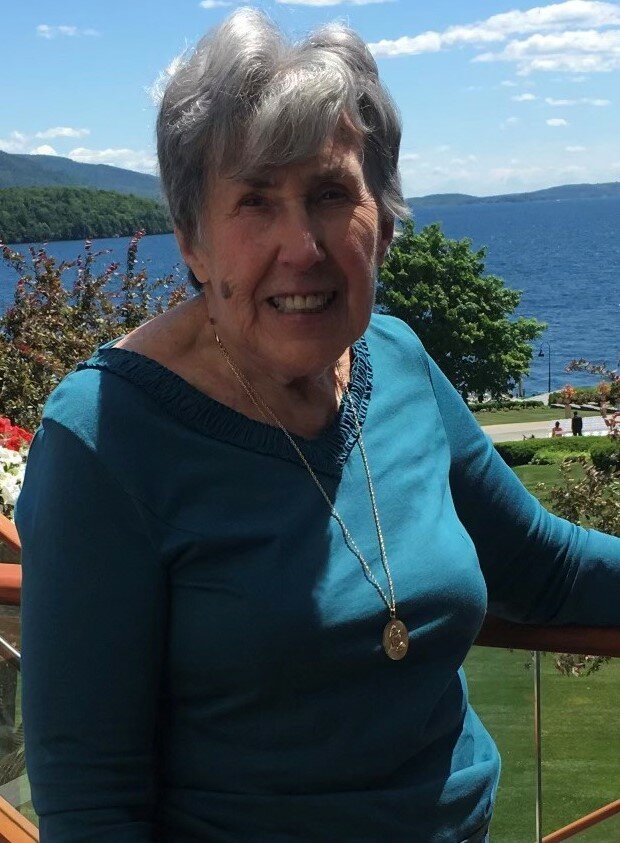 Please share a memory of Dolores to include in a keepsake book for family and friends.
View Tribute Book

Dolores Jeanne Grimm peacefully passed away on October 29th, 2022 at the age of 91 in Saratoga Springs, NY.  Despite her recent health struggles, she faced challenges head-on with strength and determination and was comforted by her faith in God’s plan until the end.

Born in the Bronx in 1931 to Walter and Bertha Grimm, Dolores enjoyed life as an only child until exactly one week shy of her 1st birthday when her little sister, Caroline, joined the family.  Dolores and Caroline were inseparable until Caroline’s passing in 2008.

Dolores graduated from Evander Childs High School in the Bronx in 1949 and started working for New York Telephone Company shortly thereafter.  Dolores spent her whole career working for “The Telephone Company” and retired after 40 years of faithful service.  She worked her way into management and was ultimately promoted to an Engineer.  Her attention-to-detail, sharp mind, clever wit, and her ability to get along with anyone served her well during her tenure.  Dolores was one of the only women in management at the time and she was well-respected by her colleagues.  She truly enjoyed her job.

Dolores was an active longtime member of Church of the Good Shepherd in the Bronx.  She was a member of their vestry from 1958 to 1990 and then spent time volunteering for various committees and programs.  Dolores loved to devote her time to help others and her faith was the cornerstone of her life.

Being a Bronx native, Dolores was naturally an avid lifelong New York Yankees fan. Whether skipping school to see Joe DiMaggio at the stadium or listening to the games on the radio to catch the play-by-play of Derek Jeter’s impressive career, her love of the Yankees spanned her whole life.  She was always eager to reminisce about her favorite players or to discuss yesterday’s game.

Perhaps the place closest to Dolores’ heart was Trout Lake in the Adirondacks.  She first visited with her family in 1951 and quickly fell in love with the beauty and serenity of the area.  She continued to visit over the years and eventually purchased a vacation cottage where she enjoyed many happy moments with family and friends. She loved to garden and if she wasn’t digging in the dirt, she was plotting what flowers she wanted to plant next. As an original member of the Millstone Association, Dolores took great pleasure in watching generations of families grow and enjoy the lake as much as she did.   In her later years, Dolores would spend her summers at the lake and loved sitting on her deck and watching the children play. It was the place she felt most at home.

One of Dolores’ favorite quotes was by Muhammad Ali: “Service to others is the rent you pay for your room here on earth”.  Dolores embodied this sentiment and truly spent her life in service to others. Whether it was caring for her mother and her sister when they were unable to care for themselves, or volunteering time to her church – Dolores gave of herself.  She was generous to a fault, a loyal friend to all, and incredibly thoughtful and kind.  She will be greatly missed by everyone whose life she touched.

Dolores is survived by her godchild, Tina-Marie Swift and her husband Bill.  She is also survived by the light of her life, Colden Swift – who brought so much joy to her life over the last 12 years.  She was so proud of him, enjoyed watching him grow up, and loved being Grandma Dee.

Share Your Memory of
Dolores
Upload Your Memory View All Memories
Be the first to upload a memory!
Share A Memory
Plant a Tree